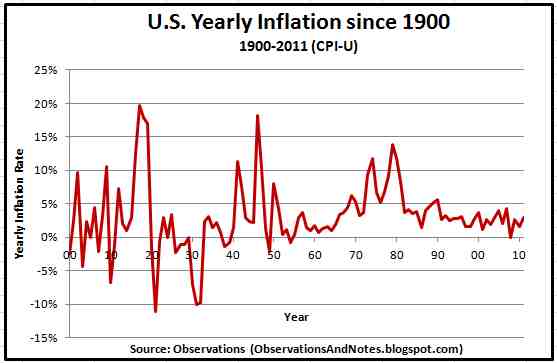 Why is Inflation in Check?

When the Federal Reserve quantitative easing programs pump trillions of dollars into the financial system, more dollars chasing the same number of goods should result in inflation.  But inflation continues to remain on the low end of the target range desired by the Fed.  Why?

The answer lies with following the money.

The Federal Reserve has been buying government bonds from banks and other financial institutions.  Those banks and financial institutions have to make money on that money.  Initially, companies borrowed that money because the interest rates were much lower on those loans and repaid the higher interest loans they had.  The difference in interest rates improved their bottom lines.  Additionally, some public companies took out low interest loans to buy back their stock, which hopefully increased their stock prices, assuming that they continued making good earnings.

But businesses did not borrow money to expand because the overall economy is still in poor shape, which limits business opportunities.  And the aggressive regulatory environment, higher taxes, and the uncertainty caused by the Obama administration’s business policies have caused business to be risk adverse.

With so few opportunities low risk opportunities to loan money, banks and financial institutions used their big war chests to invest in riskier investments.  These include the stock market, futures, short selling, derivatives, and hedge funds.

In other words, despite the Federal Reserves best intentions, trillions of dollars have gone into the restructuring of balance sheets and risky investments, instead of creating jobs.

This leads to two problems.  First, when our economy recovers and businesses start to borrow to finance their expansion, the money will flow into more people’s bank accounts.  As they spend it, more dollars will be chasing goods and services, which will increase inflation.  Second, until our economy recovers, the stock market record highs are being fueled by the Federal Reserve and the banks and financial institutions are investing in riskier opportunities, which create bubble waiting to burst.