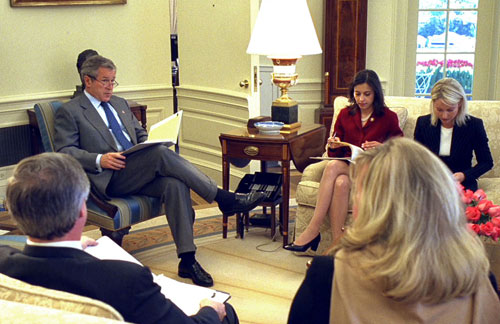 How do you become Director of the Mint? Part 1b: The President Approves

Read part 1A of this series, The Selection Process, here.

Every president handles the decision to approve his political appointees differently.  Some delegate while others micromanage.  President George W. Bush learned the importance of staffing as a business owner, baseball team executive, governor, and interested observer in his father’s White House. In addition, Clay Johnson, who had the same job under Texas Governor George W. Bush, initially headed his Presidential Personnel team.  Clay also had the President’s complete confidence because he was also one of the President’s oldest friends.

The process reflected the President’s experience and preferences.  The President wanted access to all the information on a candidate before making a decision, and as a result, requested that the staff who worked on the appointment to attend the decision meeting in the Oval Office.  He would also ask the Vice President, the White House Chief of Staff, and the Director of Presidential Personnel and frequently seek their input and advice on each appointment.

The night before, the President would receive “The Book.”  It contained tabs for each vacancy and the candidate that the White House and department or agency mutually agreed to.  There was a one-page bio and position description and a full resume for each tab.  He would review The Book thoroughly, make a few calls to gather more information, and make notes in the margins (including questions he wanted to ask).

During the President’s Personnel Meeting, each staffer would brief the President on the job description and criteria for the ideal candidate, the pool of candidates considered, and the reasons why the candidate being presented was the best recommendation.

The President would ask questions about their qualifications and validation of their backgrounds, their character and personality, integrity, competence, selflessness, and their ability to handle pressure.  He also liked candidates with a sense of humor and modesty.  Ultimately, he wanted to put together a team that worked well together and he could confidently delegate to.