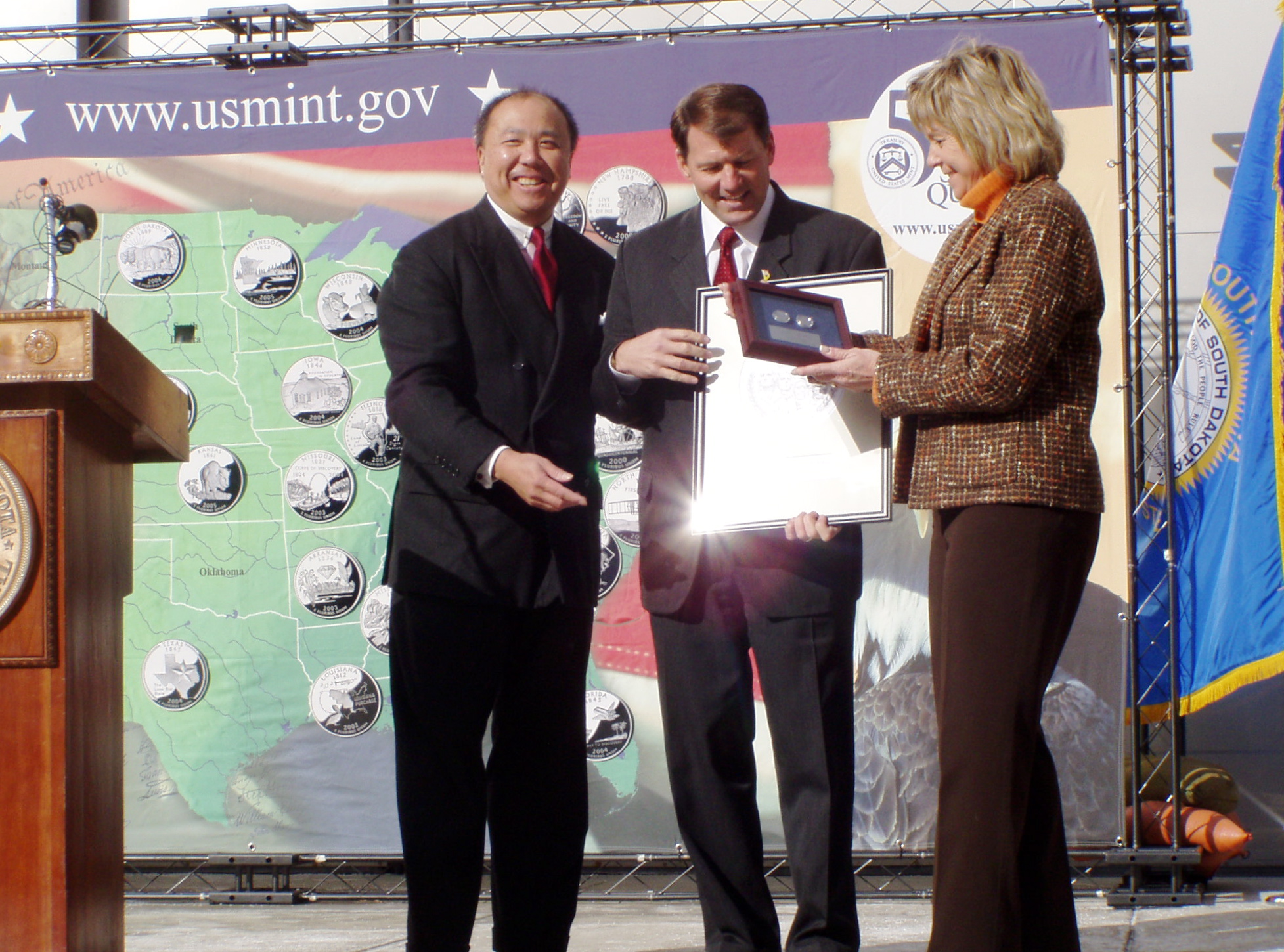 The first time I officially unveiled a new coin design and put the coin into circulation was the South Dakota State Quarter. The ceremony took place at Mount Rushmore on November 12, 2006, a little more than two months after I was sworn in as Director of the Mint.

After 39 other State Quarter launches, the United States Mint team had these events down to a science.  My team arrived a week before to advance the trip and set up the event while I arrived the night before.  Early in the morning of the day of the launch, I did several local TV interviews and phone interviews with newspapers and radio. 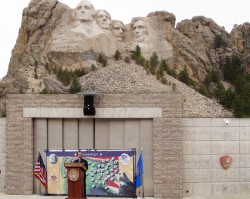 Click here to view the photo gallery from the South Dakota Quarter Launch.

Because there was no hotel near Mount Rushmore, we had to plan extra time for the long commute.  I remember how rugged the terrain was on our drive to the national park.  When we got close, there were mountain goats 20 feet off the road staring at us from their steep perches.  As we entered the park, I was amazed at how long the line was of collectors waiting to buy the first rolls of South Dakota State Quarters after the official ceremony.

It had snowed a lot the night before and the U.S. Park Service worked hard to make sure the roads were clear.  Gerard Baker, then Superintendent of Mount Rushmore National Park, hosted the event and generously opened up his office as a holding room. Governor Mike Rounds and First Lady Jean Rounds arrived soon after me.  They were very gracious and we enjoyed getting to know each other before the ceremony.  The Governor gave me a gift from the State of South Dakota of a personalized license plate.  My team walked us through the event details, especially our roles.  After answering our questions, we were led out to the Mount Rushmore Amphitheater.

I was immediately struck by how large the crowds were.  The amphitheater was filled to its maximum capacity of 3,000 and the National Park Service was able to accommodate another 1,000 in the platform above.  That, coupled with the 500 in line to buy the first rolls of South Dakota State Quarters, we estimated 4,500 people made the trek to Mount Rushmore.

It was also cold.  The storm had dumped a few inches of snow the night before and now the sky was partly cloudy.  I had a wool flannel suit on, yet I was glad every time the sun peaked out and warmed me up.

Rapid City Mayor Jim Shaw ably served as the master of ceremonies.  We had a band and a Native American drum group gave performances.  After Mount Rushmore superintendent Gerard Baker spoke, he gave Governor Rounds and I both the gift of an American flag flown atop of Mount Rushmore.  It remains a cherished memory for me.

After making a few remarks, I presented Governor Rounds with two quarters from the first day of minting and a signed copy of the artwork used for the South Dakota State Quarter.  After Governor Rounds made a few comments, he and I placed an image of the South Dakota quarter on the large map of the United States that served as a backdrop for the ceremony.

When the ceremony ended, my staff gave Governor Rounds and I bags of South Dakota State Quarters.  We made our way out into the crowds with the goal of giving a free one to every child there.

Then Great Western Bank started selling rolls of the South Dakota State Quarter.  Jeff Erickson, president and chief executive officer of the bank, and his team deserve big kudos for running the coin exchange so efficiently and with big smiles all around.  Many who got the rolls of quarters would seek me out to sign them, which I was happy to do so for kids and parents and grandparents, and to some collectors.

After a reasonable time, my staff came to rescue me and whisked me away to a holding room, where I thanked the National Park Service and volunteers.  Totally exhausted, in a good way, we departed early afternoon back to the United States Mint headquarters in Washington, DC.

View the photo gallery from the South Dakota Quarter Launch.